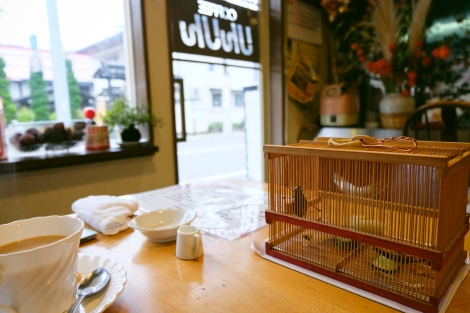 Coffee with a cricket.

After a ‘gorge’ous train ride up into the Japanese Alps to the cool little town of Takayama, we trekked our way from the train station in the rain (it’s following us!) to our next accommodation, a Buddhist ‘temple hostel’. Staying at this place made for a very interesting and memorable few nights with great sleeps. We were welcomed by the hostel manager, Matsu, who asked us to sit on a low couch while he gave us the run-down of the place: “You must leave your shoes at the door.” “You are to be very quiet here.” “There is a curfew of 11pm.” “No talking on cell phone in room.” “Sign up your name on this board for your 10 minutes in the shower room.”  Our beds were twin Japanese-style mats on the floor in a room next to an ornate Buddhist shrine. The pouring rain on the temple roof and the sheer silence of the hostel made for excellent sleeping weather.

We headed back out into the rain that evening for traditional Japanese noodles. Halfway through our meal, an older man came into the otherwise empty little restaurant and chose to sit at the table next to us. He eventually struck up a conversation, asking if it was okay that he smoked a cigarette. We got to talking a bit in broken English and he told us that he owns one of the best onsen ryokan (a traditional inn with natural hot spring pools) in the area. We did not catch the name of the place, but as he left we politely told him that ‘we might see him there!’, as sitting in mountain hot springs was a top priority to us while in the Alps. Little did we know, in a serendipitous situation, we would meet this man again (stay tuned).

Our first morning in Takayama, we walked out the hostel door and saw a big sign directly across the street: Coffee UhUh. At the word ‘coffee’, we bee-lined it straight into the café and were greeted in Japanese (Ohayogozaimasu!/‘Good morning!’) by the older patrons at the other two tables and by the cutest elderly couple who run the place. We were immediately charmed by this little establishment—classical music played in the background, the women were smoking cigarettes, the men were reading newspapers, the TV in the corner had on a silly-sounding Japanese gameshow, little bobble-head toys tilted rhythmically on the windowsill, a cricket kept chirping from a tiny cage by the door, and the sweetest older woman looked like she was performing chemistry experiments as she brewed our coffee on an antique gas syphon table behind the counter. No one spoke English, but we pointed to the menu to request the ‘breakfast special’ (coffee, a hard-boiled egg, and a piece of toast with marmalade). By the end of our meal, the cute little old man had gotten excited over our interest in their pet cricket and he put the cage right between us on our table. We giggled about having ‘chemistry’ coffee with a cricket, and we went back the next morning to see all of them again.

On our second day in Takayama, we took a bus further up into the Alps to a beautiful area called Kamikochi. The crowds of other tourists walking along the wooden boardwalk through this amazing park made us feel irritable, so when we came upon a trailhead for a ‘mountain trail’, we spontaneously decided to take that route instead. The next few hours were steep, sweaty, and challenging. But, what kept us going were the occasional groups of 60+ year olds coming back down the mountain, every single person greeting us with an enthusiastic “Konnichiwa!”! The overcast weather (seeing the trend here?) blocked our view of the high peaks and Mount Fuji, but the smaller mountains were enveloped in a majestic low-hanging fog that made the hard work worthwhile.

On our third day, we checked out of the temple hostel and headed back up into the high Alps for our big ‘splurge’ night at an onsen ryokan. We were a little stressed about spending the money for the bus ride and for the room, which was completely outside of our daily budget, but this is apparently the quintessential experience when you come to Japan. After an hour and a half bus ride, we found the place and walked in only to be greeted by…our friend from the noodle joint! We were tickled by the coincidence and in about 10 minutes, after he had toured us around the beautiful grounds and explained to us how to use the onsen (hot spring pools), we were in our kimono robes, giggling and drinking green tea at a low table in our room. There is always an ambient level of stress present when you’re in a foreign country navigating public transit systems with awkward, heavy backpacks, so when we were invited to wear our kimono robes the entire day, don bare feet around this gorgeous traditional Japanese house, and freely use the private pools of hot mountain mineral water, we sank right into the groove of relaxation. We found ourselves repeating: The Japanese have it right.

When we were called downstairs for dinner, we were guided into a semi-private dining room and presented with a traditional 11-course meal and flights of local sake. We have literally never experienced this type of service (as per our typical travel budget!). But what really made our meal was the truly serendipitous moment when the manager (our friend from the noodle place) introduced us to our waiter for the evening—“This is Sashit. He is from Nepal.”

Nepal is our next destination (we will be there in one week) and we both have had boughts of anxiety in anticipation of the purported chaos of Kathmandu, of the new sensory experiences, of the potential post-earthquake increase in desperation and thus, theft and crime, and (for me) of using Asian squat toilets. When we told Sashit that we were headed to Nepal in one week (which we actually never told to the manager, which is what made this moment even more remarkable) to help with the earthquake rebuild, he beamed and his eyes glistened with tears. He was over the moon talking with us about his home country and his aura was warm and comforting. When he left the room, Brian and I had goosebumps. The next morning, when we came downstairs for breakfast (another multi-course traditional meal), the manager entered with another boy and said, “This is Toofan. He is also from Nepal.” Toofan had even better English than Sashit, and he had the same warm and comforting presence. He asked us questions and then held his hands in prayer and thanked us with so much fervor for going to help in Nepal. Some of our anxieties dissipated upon meeting these two sweet boys, and we really meant it when we said, “It will be our pleasure.”

Toofan has friends that own a hotel and trekking company in his hometown of Pokhara, and he said he would contact them to help us arrange our stay and trek when we go there in a few weeks. He also gave us some safety advice for our travels in Kathmandu. We became Facebook friends and by that evening, he had already reached out to us as a liaison with his friends. Given our recent apprehension about going to Nepal, the entire sequence of events leading to meeting these boys felt to us like the universe at work, and we could not be more charmed by the sweetness of the Nepalese people already.

Ancient farm houses of the Hida folk village in Takayama.

Buildings blend with their surroundings. The village is sometimes referred to as being ‘hidden in the leaf’.

Thick roofs and large overhangs protect the inhabitants from the winter snow. 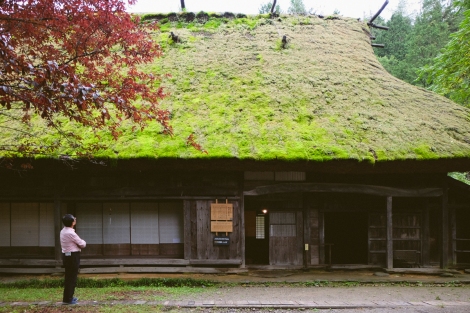 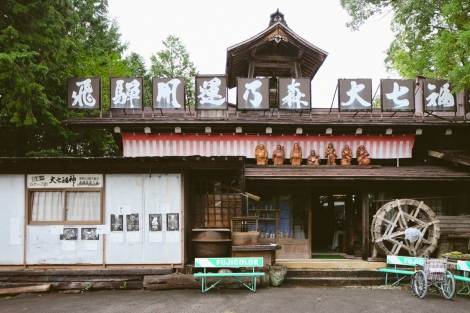 Brian looking awfully tall amongst the crowd on the Kappa-bashi bridge located at the base of the Japanese alps. 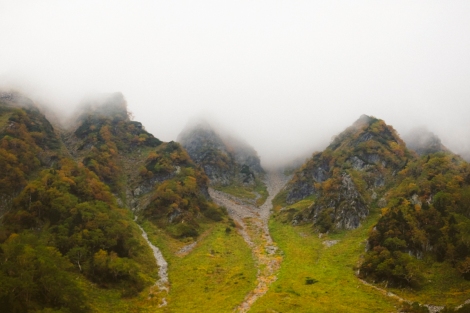 Clouds rest heavy upon the base of the peaks towering above.

The sound of flowing water echoes through the forests. 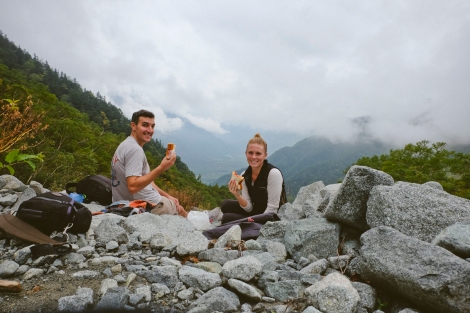 Enjoying an extra large PB&J after a 2 hour climb to a beautiful look out.

‘Wabi-sabi’ represents Japanese aesthetics and a Japanese world view centered on the acceptance of transience and imperfection. 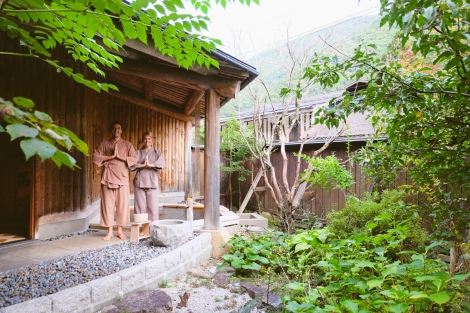 We could get used to this…

"I'd like to circle round the whole world twice, just getting lost with you by my side." [pokey lafarge]